Eight years after I was released from jail, my record now shows no arrests, no charges, no jail time. Just a regular guy who has had zero problems with the law. All wiped away. I am so relieved. Thanks for following along with this story. It is now officially over. NO CRIMINAL RECORD. The End!

The NH State Police called me back today.

The nice woman on the phone was very polite and respectful. She let me know that she looked into my records and found the judge’s order saying they were supposed to expunge my entire record, and they must have made a mistake and missed some.

(An honest mistake, they took care of 5 arrests and 16 charges with a single $100 fee. It’s reasonable to have missed a couple pages in the huge stack of paperwork they had to sift through.)

She took care of it and asked me to re-apply for a criminal history check — with no fee for that — just a note saying the fee had been waived. So I sent that in.

What happens next? Will my record finally be cleared after all these years?

DEO is released from jail, CopRoaches go family style on a 16 year old girl, Severin and Rick stop a drunk driver, a coproach uses Craigslist to pose as a woman and suck dick from random strangers in a glory hole while filming them without consent, and more!

Also, the band Tropidelic was held at gunpoint by coproaches raiding the wrong house, and now they’re suing! Here’s one of their dope tracks:

Interview with Ed “NJWeedman” Forchion – His restaurant was raided by Trenton police, and his security cam footage stolen, but he’s not giving up that easily. He’s back and open for business with a sign that says FUCK THE POLICE!

DEO is released from jail tomorrow thanks to donations of $1000 that were raised in 3 hours. An amazing swell of support erupted when Ademo Freeman announced the judge in his case offered a ransom to release DEO until his appeals.

Massachusetts police chased a driver into New Hampshire and then beat him live on the news, even though he was on the ground with his hands in the air. Don’t worry, though — they’re investigating themselves.

NJ Weedman Taunts CopRoaches in front of his restaurant

A kid on his bike is viciously attacked by coproaches for not producing ID while being cited for riding his bike on the sidewalk.

This week on CopBlock Radio we discuss Copblockers on trial, including representatives from Texas, Allentown, Carbon County And Lehigh Valley CopBlock groups all seeing a judge It feels like the state has targeted those that film police or exercise their rights. The campaign being run by police calls for jail and violence to be used against those that would questions them.

END_OF_DOCUMENT_TOKEN_TO_BE_REPLACED

Last night on CopBlock Radio, DEO called in from jail, a hot CopBlocking Mama makes a stand for a better future, and CopBlock founder Ademo Freeman reveals that the world’s largest gang…is in your town!

Regular CopBlock Radio cohost DEO was made a political prisoner by a gang of people calling themselves “the state of Ohio.” They intend to keep him isolated in a concrete cage for 240 days as punishment for disobedience to authority. You can read more about that here. He calls into the show in this episode. Also, some guy who wore a dress to work died this week. People are upset, not because he died, but because another cross-dresser will take his place for life.

Regional physical media chain Bull Moose recently opened its doors in the old Video Headquarters location in the Hannaford plaza on West Street in Keene. They carry a wide variety of media including video games, cds, vinyl, DVD, Bluray, and even books! It’s refreshing to see someone trying to keep physical media distribution alive – hopefully it works out for them. Kudos also to Bull Moose for carrying Keene-produced-and-edited documentary Derrick J’s Victimless Crime Spree on DVD! 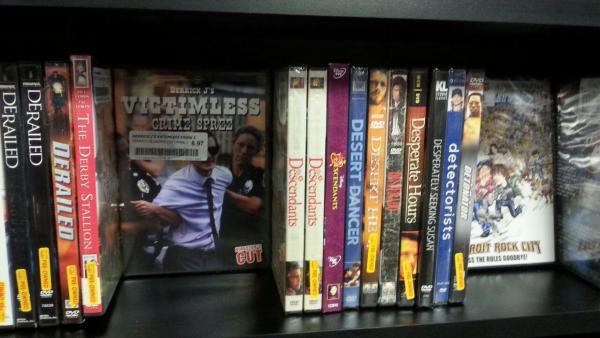 Of course, you can watch the feature-length documentary produced by Free State Project participants for free in its entirety online, but that doesn’t do you any good if you’re looking for a gift for this holiday season. Victimless Crime Spree makes a great stocking stuffer, and Bull Moose in Keene is selling it for LESS than Amazon! Amazon has it listedfor $7.93 while Bull Moose has it on-the-shelf, brand new, for just $6.97! There’s no cheaper place to purchase the Director’s Cut DVD, which is loaded with hours of bonus footage and even features TWO commentary tracks!

Bull Moose has three copies in stock as of yesterday, so if you’re looking for a perfect last-minute gift, stop in to 401B West St. in the Hannaford plaza. They’re open until midnight tonight and 7pm on Christmas Eve.

If you don’t live in the Keene area, just grab your copy at Amazon where it qualifies for Amazon Prime and Free Super-Saver Shipping!

Next, government school employee Mike Frassetto calls in to share the story of Allentown law enforcers assaulting a group of children. The kids recorded the assault, but they were charged with crimes instead of the badged individuals who attacked them with tasers, fists, and kicks to the stomach.

END_OF_DOCUMENT_TOKEN_TO_BE_REPLACED

This episode of CopBlock Radio is JAM-PACKED! From beginning to end, we had great callers. Chris the Paranoid Engineer started things off by calling in to warn listeners that the government is creating profiles of you based on how many cops you kill in Grand Theft Auto. Attorney John Gold called in to talk about DEO’s arrest for filming law enforcers in Parma, OH. A law enforcer in Florida showed up drunk to accept an award from Mothers Against Drunk Driving. He was being awarded for issuing more than 100 DUIs and presumably drove himself to the ceremony. Other badged individuals reported that he also skipped days of assigned training and was walking around the hotel with his pants down. What would we do without our noble protectors?